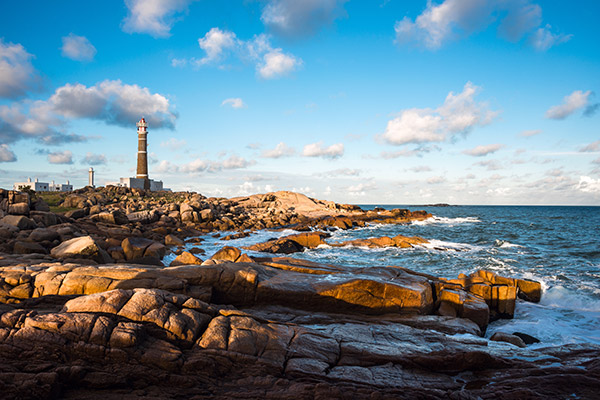 South America's smallest Spanish-speaking country, Uruguay draws fewer tourists than its more famous neighbours, Brazil and Argentina. But perhaps it is just as well that Uruguay keeps a low profile. This way, you can experience the un-commercial Uruguay - and enjoy the hot springs, the sandy beaches, the dunes and lagoons on its long Atlantic coastline all to yourself.

Uruguay is nestled between the continent's two giants, Brazil and Argentina. Montevideo, its capital city, is located at Uruguay's southernmost point on the Rio de la Plata. One of the Americas' most important seaports, Montevideo draws travelers from all over the world - many just hoping to bask in its multicultural European charm. Narrow streets and varied architectural styles ranging from colonial to Art Deco reveal this vibrant city's strong Spanish, Portuguese, French and British influences. And while most of its historic sites can be visited within a few hours, walking through the port area and exploring old neighborhoods is the best way to discover the true allure of Montevideo.

This former jetsetter's paradise is once again being rediscovered by tourists. It features stylish streets with designer shops and discos where you can dance till dawn, but the real draw to this decadent peninsula are its beaches. With the Atlantic Ocean on one side and the Rio de la Plata on the other, Punta boasts over 20 miles of pristine sand and surf, perfect for playing or lounging in.