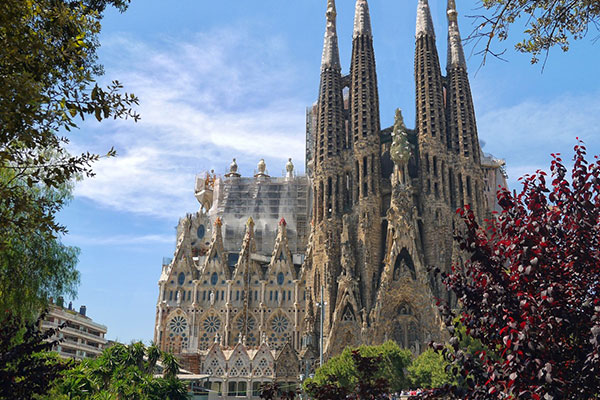 A bullfight easily captures the spirit of a trip to Spain. Never boring, it promises thrills, reveals the toreador’s courage and dedication to his art, while also betraying his sympathy for the bull once wounded. Yes, Spain is all heart - intense, passionate, exciting. It’s in its sprawling countryside and golden beaches, in its historic towns and world-class museums, in its rich cuisine and colourful fiestas, and even in its siestas (or naptimes) that everybody takes ever so seriously. If you want a trip to remember for a long time to come, then you’ll have to decide on Spain.

Famed for its individuality and cultural interest, Barcelona is the capital and cultural hub of Spain's Catalonia region, and one of Europe’s most vibrant cities. When Hans Christian Andersen visited in 1862, he remarked that Barcelona was the "Paris of Spain." You're likely to agree. The city is a major cultural centre with a fascinating history. Everywhere are archives, libraries, museums and buildings of interest - plus superb examples of modernist and Art Nouveau décor and architecture.

Stroll along Las Ramblas, explore the cobbled streets of the Gothic Quarter or visit Gaudi’s unfinished masterpiece, the Sagrada Familia. Alternatively, take a biking tour through the old town and along the seafront. Take a walk around Gaudi’s Park Güell, a truly magnificent oasis of plants, trees and buildings.

The cultural heart of Spain's celebrated Basque country, the shining city of Bilbao is filled with Gothic architecture and landmarks that herald its centuries-old history. But the more modern additions to this post-industrial port town - namely, the spectacular Guggenheim Museum - seem to be drawing the most attention these days.

In the southeast of Spain on the Mediterranean Sea, you'll find a natural harbour surrounded by five hills - welcome to the seaport known as Cartagena. Cartagena was the main city of the Spanish Carthaginians, who named it after their own capital. The port is rich in ancient and maritime history. The town is walled, the harbor defended by forts, and Roman ruins are scattered throughout. Let the adventure begin!

Ibiza ("e-vee-tha" or "e-bee-tha" or "e-bee-zha," depending on where you're from).attracts all sorts of people with its vibrant nightlife and perfect Mediterranean climate. In fact, outside of Paris or Manhattan, there’s hardly a more cosmopolitan mix than the one you’ll find in Ibiza. Ibiza’s beaches, some of the most beautiful in the Mediterranean and often the setting for many movies, draws this international party crowd.

If there ever was a seafaring city, La Coruña is it. It's been a port and gateway to world travellers for over 2,000 years. From almost any spot, you can witness spectacular panoramic views of the ocean. Located on Spain's northwest Atlantic coast, this ancient city is a pleasing blend of the old and new. It is the site of the oldest Roman lighthouse in the world and the early training ground of the young Picasso. In addition to its collection of Romanesque streets, squares and medieval churches, La Coruna's dazzling beaches and lively nightlife have made it a favourite vacation destination.

With its landscapes filled with beaches and more than 300 volcanoes, plus perfect weather all year round, you'll quickly see why Lanzarote is an award-winning tourist destination. The island's dedication to the environment and tourism has even resulted in recognition from the World Tourism Organization as a universal model of sustainable development. In addition, the island has gone to considerable lengths to preserve its own history, culture and heritage.

An ecological paradise, Lanzarote is perfect for exploring. Its crystal-clear waters, scuba diving and snorkeling are phenomenal, as are the deep-sea fishing and surfing. Another advantage Lanzarote has is the wind itself. With steady trade winds all year round, it's one of the best windsurfing spots in the world. Or, if you'd rather stay on land, you can ride the beach by horseback, venture out on a bike trip or hit the golf course.

Gran Canaria is one of the seven Canary Islands, located off the northwest corner of Africa. As the most populated island of the archipelago, you'll find the local culture is a unique blend of Spanish, African, Latin American and Northern European communities. But the diversity doesn't end there. Gran Canaria also has three distinct climates and landscapes, including snow-capped mountains, gorgeous beaches and tropical forests with lush vegetation.

A bustling coastal city and the capital of Costa del Sol, Málaga is the second largest port in Spain. One of the most interesting places to explore is the old historic quarter, which dates back nearly 800 years. The birthplace of Pablo Picasso, Málaga boasts miles of beautiful beaches, picturesque gardens and fantastic weather.

Since the late 1990s, the island of Mallorca has undergone a tremendous transformation – in an attempt to correct its reputation as a cheap destination for fun under the sun. The facelift included dropping the name Majorca in favour of the original, Mallorca, and even literally blowing up old-style hotels. Today, Mallorca is once again a chic holiday destination, celebrated for its style, natural beauty and the unpretentious warmth of its people.

Palma de Mallorca is the major city and port on the island of Mallorca. The island's coastline is marked by a series of small caves and beautiful beaches.. The number of people greatly increases in the spring, as the island is a favourite European resort. In the summer, Spain’s Royal Family spend their holidays here.

Attractions
La Seo, the city's massive Gothic cathedral, which was built on the site of a mosque and makes an impressive sight as you sail into Palma. Antonio Gaudi himself has helped restore parts of this cathedral.

Tenerife’s north shore is separated from the south by rugged mountains, creating a rain shadow. The majority of the island’s most recent resorts are found in the sere and parched south shore. Take a deep breath. Can you smell bananas or pineapples? They are grown on the plantations which are just a short ride away from the beautiful beach resorts and lively town centre of the island.

Santa Cruze de Tenerife is the capital of Tenerife.

The charming old quarter in Cadiz makes it easy to see why the small town is frequented by Spaniards on holiday. Its intriguing ancient streets, delightful plazas and flower-filled balconies make exploring a must. Along the way, restore your energy at any of the mouth-watering tapas bars offering some of the country's finest seafood and typical Andalucian cuisine.

Marvel at the collision of old-world charm and modern architectural genius in Valencia - Spain's gateway to the Mediterranean. Among the baroque cathedrals, bustling plazas and engineering masterpieces, you'll find friendly locals, inspired artists and a rich cultural heritage.

A busy, mid-sized port on the Atlantic Coast, Vigo is located just north of Portugal and is Galacia's largest and most industrialized city, dating back to Roman times. If you're a beach-lover, then Vigo is for you. You can soak up the rays at one of several sparkling beaches, including Samil, Alcabre and Canido.